You mention Westminster School held on to the older Anglo Latin
pronunciation. From Wikipedia on the coronation of a British monarch:
"King's or Queen's Scholars of Westminster School can exercise their
right to be the first commoners to acclaim the sovereign, shouting
their traditional "vivat"s as he or she enters the coronation theatre."
In 1953, those Westminster scholars still said [vaɪ væt]. I suppose
they were holding on to that pre-1900 pronunciation.

I think that’s traditional for everybody. See LPD.

In a somewhat-related idea: the capital city of the province of
Saskatchewan is only pronounced [ɹə ʤaɪ nə] in Canada.

While an Anglo Latin exists in the Church of England in those
canticles, it it interesting to note that one hears only that Italianate "Church" Latin in full choral works of English composers. I am thinking of Vaughan Williams Mass in G minor and Dona Nobis Pacem, Elgar's Ave Verum corpus, Britten's War Requiem, and the list goes on. …And I am speaking of BrE recordings here (King's College, LSO, David Willcocks, Adrian Boult, etc.) Maybe this is along the lines of
Paul's comment about his experience of a more Italianate Latin learned
in his school.

Someone commented on the Orff piece. It is my experience that because of the mixture it has of Latin with older German and French, one has to decide at the outset what system(s) to employ. Even then, it does not always work — I am thinking particularly of "iam amore virginali totus ardeo" in which the soprano and later baritone sings with the "Ragazzi." So often the soloists have already opted for a German [vir gi na li] and the boys come in to rehearsal having learned [vir ʤi na li], and it's back the drawing board. 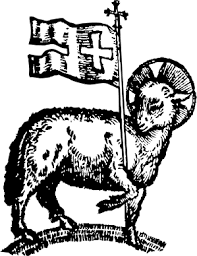 We might also mention the Agnus Dei, which for me at school was ˈæɡnəs ˈdeɪiː, but which one often nowadays hears sung as ˈænjʊs-, with a clearly Italian-influenced treatment of gn. (Again, see LPD. EPD doesn’t mention this possibility, though.)
Posted by John Wells at 17:10