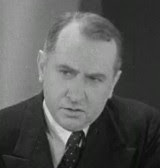 Michael Ashby has kindly drawn my attention to a marvellous short film from the digital news archive of British Pathé.

In this five-minute film, dating from 1940, we see a Sinhalese student, played by one Dr M.D. Ratnasuriya, visiting SOAS to be taught proper English rhythm by the professor of phonetics, Arthur Lloyd James, played by himself (“Prof. A. Lloyd James, Secretary to the B.B.C. Committee on Spoken English”).

Today Lloyd James’s accent seems very dated: particularly in the TRAP vowel, that 1930s sort of tense [ɛ], in the words Jack and Paddington. He has a very open final happY vowel in carefully [ˈkɛəfʊlɪ] and immediately [ɪˈmiːdʒətlɪ]; and a correspondingly open final thankyOU vowel in will you [ˈwɪljʊ]. His THOUGHT vowel in jaw is opener and less rounded than is usual today. He uses a tapped r [ɾ] in intervocalic position, e.g. in very [ˈveɾɪ] and as linking r in your address [jʊəɾ əˈdres]. All of this is typical of the RP of that era.
Perhaps his braying NEAR vowel in the phrase what we hear [hjɐː] is to be explained as betraying his Welsh origins. His parents were actually Welsh-speaking. Collins and Mees comment

Audio recordings show that although he transformed his speech into something very close to RP, he nevertheless always retained faint traces of his native Welsh accent.
[The Real Professor Higgins. p. 275]

I’m not at all impressed with his imitation of American English.

By today’s standards his manner towards his student seems starchy and patronizing. But then today you wouldn’t see a newsvendor wearing a cloth cap and with a cigarette in his mouth.
Posted by John Wells at 13:47