you ARE a dark horse! 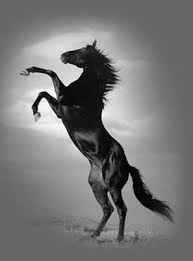 Tami Date asked for my comments on the accent pattern of the underlined parts below.

My immediate reaction was to suggest that ‘be a dark horse’ is an idiom with a fixed focus pattern, like ‘to have a bee in one’s bonnet’. A dark horse is someone who is not well known and who surprises people by winning a competition; hence, someone who acts secretively to surprise people. (LDOCE says this second sense in BrE only.)

partly because you can produce any number of such constructions ad lib and partly because an idiom is something I think of as not predictable by simple logic.

“Any number of such constructions?” I've been trying to think of some. I have to say I have not been very successful in this task. What we want is an accented verb to be followed by lexical material that is new in context but unaccented.
Instead of saying that someone was a dark horse you could say

That was a surprise.

If a child wants praise for some achievement you could say

You are a clever boy/girl.

Daddy will be pleased.

Compare also the possibility of placing the nucleus on an intensifying word, despite following new lexical material.

That’s very interesting.
I was extremely annoyed with them.
I know exactly what you mean.

You are a one!

(LDOCE: BrEng, old-fashioned, to say that someone’s behaviour is amusing, strange, or surprising.)
I can’t think of any others. Jack?
All these, including you are a dark horse, are exclamations, and as such must have a falling tone of some kind (low fall, high fall, rise-fall).
Posted by John Wells at 14:12