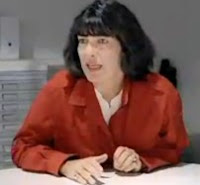 Here’s a nice little video from YouTube. It’s an advertisement for CNN, in which Christine Amanpour purports to attempt to teach the approved pronunciation of Iraq(i) and Iran to a would-be presenter who wants to say them with /aɪ-/.

The last two seconds of the clip is nice, too. We’re supposed to say /tʃetʃˈnjɑː/.

While on the subject of mispronunciations, a few weeks ago I saw the former US presidential candidate John McCain pronouncing infectious as /ɪnˈfektʃuəs/. Put that in the same box as prenuptial (blog, 9 June 2006) and rumbustious (blog, 27 Nov 2008).
Posted by John Wells at 17:07