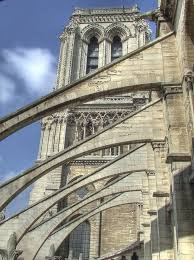 Some twenty or more years ago I invented the term “buttressing” to refer to the use of the strong form for an unaccented preposition with a pronoun complement, after the nucleus in sentences like

The use of strong or weak form can go either way in both cases, but on the whole we tend to use a strong form (frɒm) in (1), a weak form (frəm) in (2). The more weak syllables intervene after the nucleus, the more likely a strong form.
I used this terminology when I gave some lectures on English phonetics in Buenos Aires in 1992.
Later I decided (or perhaps was persuaded by my colleagues) that it is not necessary to have a new term for this phenomenon: we can just call it “rhythmic strong form”. It complements “stranding” (What are you looking at?): the two principles together account for strong forms in unaccented syllables.

When I returned to Buenos Aires last month several people approached me to say how much they liked the term “buttressing”. Why had I abandoned it? Would I reinstate it?

I have a slight feeling of guilt at having invented, or at least popularized, rather a large number of new technical terms in English phonetics, and try to keep them in check. (For instance, I abandoned the Latinate “correption” in favour of the English “smoothing”.)

From tomorrow I shall be travelling again, and this blog will be suspended. The next entry will be on Thursday 15 October.
Posted by John Wells at 16:12