This is one last posting about Korean.
A claimed advantage of hangul over the Roman and other alphabets is that it is feature-based. The symbols for the aspirated plosives, ᄑᄐᄏ [pʰ tʰ kʰ], are derived from those for the unaspirated/voiced ᄇᄃᄀ [p~b t~d k~g] by the addition of a single horizontal line (sort of). Those for the tense plosives, ᄈ ᄄᄁ [p* t* k*], involve doubling the basic jamo. Given that [e] is written ㅔ and [je] as ㅖ, it is logical that from ㅏ [a] we get ㅑ [ja]. And so on. Further, by exercising a modicum of imagination we can see in ᄀ [k~g] the outline of the tongue dorsum raised against the velum, and in ᄂ [n] the tongue tip raised to contact the alveolar ridge.

Hyun Bok Lee, the Professor Emeritus of Phonetics at SNU, wants to go beyond this. He is keen that the Korean writing system should also be used internationally in place of the IPA. You can read about his “IKPA” proposal here. It involves extending the hangul by adding various additional and modified letters so as to cover everything included in the IPA. And — an important point which he fails to discuss — it is to be written linearly, not arranged in syllable-sized character spaces as is done in Korean orthography.
It is exemplified, as applied to Korean, in the IPA Handbook, p. 123, and he has also produced a booklet about it. Unfortunately the web page supposedly devoted to it, www.ikpa.snu.ac.kr, doesn’t seem to be available. 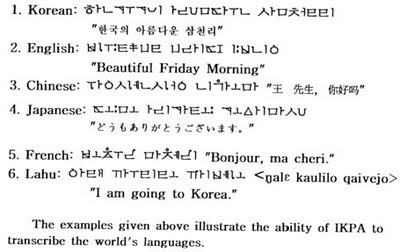 (As you can perhaps see, the English sentence transcribed actually ends “evening”, not “morning”. And there doesn’t seem to be any indication of vowel nasalization in the French [bõ-].)
Posted by John Wells at 14:59