At the Seoul conference (blog, yesterday) the Koreans were very proud to be able to draw to our attention the first use of the Korean writing system for a language other than Korean itself: namely for the language Cia-cia.
This is an Austronesian language spoken in and around the town of Bau-Bau on Buton island off the coast of Sulawesi in Indonesia. 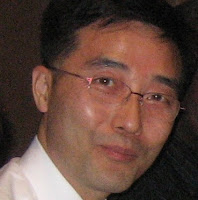 My former PhD student Lee Ho-young (pictured), now professor of phonetics at Seoul National University, tells me that he was one of the main activists behind this achievement. He helped produce literacy materials including a textbook. Read more here.

With one exception, the Cia-Cia phonemes can be mapped onto a subset of those of Korean and are therefore written the same way. The exception is the fricative /v/, which is not found in contemporary Korean, but for which Lee resurrected the obsolete hangul jamo (or Korean letter) ᄫ (U+112B). (ᄫ was used as a symbol for the voiced bilabial fricative.)
The Cia-Cia implosives /ɓ/ and /ɗ/ are written with standard hangul jamo, as ㅍ and ㅌ. So the series /t, d, ɗ/ are written with the jamo that in Korean stand for /t*, t~d, th/ respectively, namely ㄸ, ㄷ, ㅌ.

The Cia-Cia word for ‘television’ is borrowed from Indonesian televisi, and is now written 뗄레ᄫㅣ시. (Actually that’s not exactly how it's written: the β jamo ᄫ and its following vowel ㅣ ought to be written within a single character space, but I’m not sure how to achieve that on my computer.)
Note the Korean-style treatment of /l/, written as double ᄙ and straddling two character spaces.
Posted by John Wells at 14:58