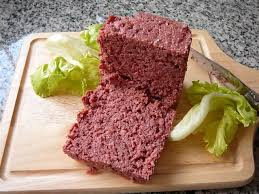 Sili (24 October) mentioned the rivalry between “boxed set” and “box set” or “boxset”. A favourite example of this phenomenon that I used to use in my teaching days is “corned beef” (which is what it says on the tin) and “corn beef” (which corresponds to what we mostly say).
The principle this illustrates is that final /d/ in a consonant cluster is susceptible to elision when the next word begins with a consonant sound. In the case of a lexicalized phrase such as corned beef, people learn the pronunciation in its reduced form and may be unaware of the full form underlying it. They then spell it in accordance with the reduced pronunciation, which is for them the only pronunciation.
In Google, corn beef gets 180,000 hits, as compared with 1,450,000 for corned beef, a ratio of 1:8.
The books don’t tell you this, but I think this elision is less usual before /r/. I don’t think I can omit the /d/ from boiled rice.
I certainly can’t omit it in fried rice, where the final /d/ is not in a cluster and therefore not a candidate for elision. In Google fry rice gets 37,000 hits as compared with the 2,190,000 for fried rice, a ratio of 1:59.
In Chinese English, however, fry rice seems to be quite frequent. Here’s a picture of some “fry mushroom”.

In cases such as stir-fry rice noodles I think we have to analyse stir-fry as a nominalization of the verb (“noodles for stir-frying”).