I don’t know when or why one lost its weak form /ən/ in standard accents. It remains, with the spelling ’un, as a dialectal or jocular form. When I was a boy there was an evening sports paper called The Pink ’Un.

I imagine it was used only for dummy one after an adjective, as in a green ’un, a new ’un, a big ’un. That seems to be the position in those forms of English that retain it. I don’t think anyone would use it in contexts such as *I’ve got ’un, even though the dummy pronoun one in I’ve got one is normally unaccented.

Today’s Guardian has a picture of a small lemur with the headline Hallo wee’un, one of the worst puns for months. Since it doesn’t seem to be on their website, I have scanned it for your delectation. 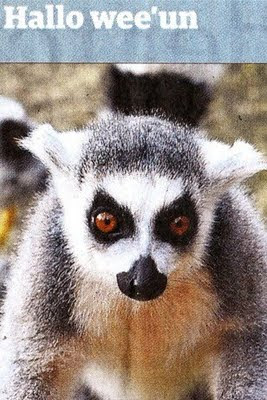