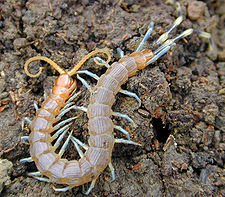 There was an interesting pronunciation that I observed during my recent stay in Montserrat in the Caribbean: centipede pronounced as ˈsantipi. Not only is the final d lost as compared with the BrE/AmE ˈsentɪpiːd, -ə-, but the stressed vowel is that of TRAP rather than the usual DRESS.
The only published book about Montserratian speech, George Irish’s Alliouagana Folk (Plymouth: Jagpi, 1985), is a collection of local proverbs, sayings, words and phrases. It duly records this word in its glossary.

Richard Allsopp’s scholarly Dictionary of Caribbean English Usage (OUP 1996) also records this pronunciation of the word (though with a different medial vowel) as common to the entire Caribbean English Creole region, and speculates about its origin as Portuguese.

I can see that a Portuguese source could explain the loss of the final consonant — though this could also be due to the characteristic Creole uncertainty about final d (compare for instance galvanize meaning ‘corrugated metal roofing’, shortened from galvanized iron). Apart from that, though, I would have thought that Portuguese centopeia, phonetically sẽtoˈpeja, does not seem on phonetic grounds to be a more likely source than a straightforward English origin. (OK, English got it via French from Latin centipeda ‘hundred-foot’, as did the Portuguese.)
Posted by John Wells at 09:47