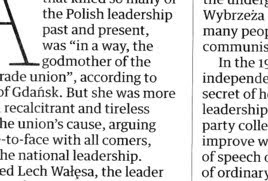 As I have mentioned before (blog, 26 Aug 2008 and 25 Jan 2010), the Guardian newspaper is now able to print accented (= diacritic-bearing) Latin letters not only for west European languages but also for those from eastern Europe. My picture shows part of a page from the 15 April edition of the paper. In the course of an obituary for Anna Walentynowicz, “godmother of the Solidarity trade union” they managed Gdańsk and Wybrzeża correctly (though they didn’t attempt Solidarność). But look what happened to Wałęsa! The barred l was fine, but the ogonek under ę turned into a cedilla instead, giving ȩ.
I don’t know whether the Guardian journalist tried to compose the letter from an e plus a diacritic, and chose the wrong diacritic, or whether s/he just picked the wrong precomposed letter from a dropdown list. Either way, it provokes the question: what language, if any, has U+0229 LATIN SMALL LETTER E WITH CEDILLA in its orthography? If none, who uses this symbol, and for what? Presumably it must be or have been in use, because otherwise Unicode would not have admitted it. (It’s in the Unicode block Latin Extended-B, in a section headed “Miscellaneous additions”.)
Can anyone enlighten us?
Stranger still, at U+1E1D (Latin Extended Additional) Unicode also recognizes LATIN SMALL LETTER E WITH CEDILLA AND BREVE, i.e. ḝ.
You can check it out on the on-line Unicode site here.
The on-line version of the obituary has ę correctly.

Commenting on yesterday’s blog, with reference to the character ö, one contributor apologized “Sorry, I don’t have easy access to diacritics”. I was wondering just what input device he was using that can’t input an o-umlaut. Even a mobile phone can do that. On any Windows computer you can key in
• Alt+0246 (on the numerical keypad)
• or on some computers Alt+148
I am sure you can do something similar on a Mac (option-apostrophe?). If using Word you can do
• Ctrl+(Shift+):, o
• or 00F6, Alt-X
For HTML, including blog comments, you can also type
• &#246;
• or &#xF6;
• or &ouml;.
Perhaps these don’t count as “easy access”. Or perhaps people just don’t know about them. If anything, we have a confusingly large range of possibilities.