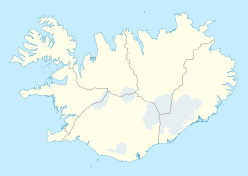 A family wedding a few days ago, causing a gap in this blog, means that we have not yet discussed the pronunciation of the Icelandic volcano that is causing such unprecedented air traffic disruption in Europe. By now everyone else has, though.

Here is the advice from the BBC pronunciation unit. The BBC’s formulation does not use IPA, relying instead on its special respelling system. Interestingly, the headline replaces the character ö with oe, which seems very lame. So do the maps below. I suppose it’s better than Eyjafjallajokull (no diacritic), which is what some of our newspapers have been printing.

For an IPA rendering you’ll have to turn to Wikipedia, which tells us that it’s pronounced ˈɛɪjaˌfjatlaˌjœːkʏtl̥.

I think, though, that many of us would find it a challenge to come up with precisely that on the basis of the sound clip supplied.

Language Log offers us not only a number of rival versions pronounced by pukka Icelanders but also a selection of feeble attempts by non-Icelanders, including a Youtube compilation of newsreaders’ efforts.

I have to say that for Icelandic final/preconsonantal ll I’ve always been tempted to write tɬ rather than tl̥. I hear quite a bit of friction in the lateral component, so that we have a voiceless alveolar lateral affricate. I have a friend named Hallgrimur, whom I call ˈhatɬkɾɪmʏɾ̥, I hope correctly.