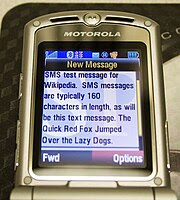 An SMS, a short message that you send or receive using your mobile phone (AmE cellphone) is generally known as a text. This word is also used as a verb and verbal noun: texting. (I see that David Crystal is giving a talk today at Berkeley entitled “From texting to tweeting: the brave new world of internet linguistics”.)


But what is the past tense of this verb?
Leo Holroyd asked

What is your opinion on the past form of the verb "text"? Many people use "text" rather than "texted" in the past tense (in both speech and writing), which is clearly irregular, and to me surprising. I can only guess that it has something to do with the unusual ending "-ext". Is it common for verbs to become irregular for this sort of reason?

He’s right. Many people, in Britain at least, use [tekst] as the past tense. I suppose we could spell it texed.
You can see how this has arisen. The final cluster [kst] is highly susceptible to losing its final consonant, particularly when followed by a consonant sound.

— in all of these it’s usual for the final [t] to be elided (lost) except in very careful (over-enunciated) speech. Likewise we say

— so that [teks] can come to seem to be the basic form.
Then, just as the plural of box [bɒks] is boxes [bɒksɪz], so [teks] seems to need the plural [teksɪz]. And just as the past tense of box is boxed [bɒkst], so the past tense of tex(t) comes to be [tekst].
Indeed, [ə teks(t) mesɪdʒ] could then be interpreted as a texed message, one that you can tex to someone.
It may seem shocking to us highly literate people. But many users of text messaging are not highly literate (though I agree with David Crystal that text messaging, by encouraging people to read and write more frequently, helps literacy rather than hindering it).
I should think that the contex(t)-free pronunciation [teks] for the verb will persist.
Posted by John Wells at 14:30